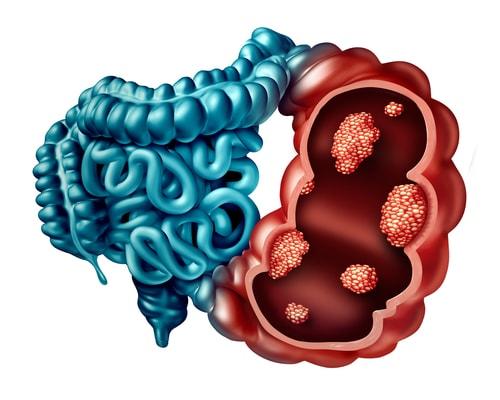 Bowel cancer is the second most common cancer in both men and women aged over 50 in Australia. Also known as colorectal cancer, it develops in the lining of the bowel and depending on where the cancer develops, is called either colon or rectal cancer. It is usually preceded by the development of growths known as polyps and can become invasive cancer if left undetected.

Who is at risk of bowel cancer?

While everyone is at risk of developing bowel cancer, there are some key risk factors to be aware of. These risk factors are:

What are the symptoms of bowel cancer?

In the early stages of bowel cancer the symptoms are not always detectable and can sometimes mimic the symptoms of other medical issues. As such it is important to flag these with your health care provider so that they can rule out bowel cancer as the cause.

Symptoms to look out for include:

How is bowel cancer diagnosed?

Bowel cancer is formally diagnosed by biopsy usually obtained during a colonoscopy. Due to the non-specific signs other investigations may be strongly suspicious of bowel cancer such as a CT scan. PET scans and ultrasounds may be used to identify how advanced the cancer is.

How is bowel cancer treated?

There are a number of treatment options available for bowel cancer depending on how advanced it is. In its early stages surgery maybe the only required treatment although radiotherapy combined with chemotherapy is often used before surgery for locally advanced rectal cancer to reduce the amount of cancer present. In situations where the cancer is more advanced, adjuvant chemotherapy is likely to be discussed. It aims to kill microscopic cancer cells that maybe left behind following surgery to prevent the cancer reoccurring in the future.

In advanced bowel cancer the main stay of treatment are drugs targeted against the cancer. These maybe chemotherapy or targeted treatments which are administered into the bloodstream and attack the cancer throughout the body. In certain specific situations it is possible to consider surgery to remove secondary cancers that have developed in other areas of the body.

How can bowel cancer be prevented?

While there is no way to completely prevent bowel cancer there are a number of ways that the risk can be reduced by not smoking, a healthy diet with plenty of fresh fruit and vegetables, and maintaining a healthy body weight. In Australia, there is also a screening called the Faecal Occult Blood Test (FOBT) which is a test that can be done at home that looks for traces of blood in a bowel motion in people without symptoms. It can help to detect bowel cancer in its early stages and should be done every two years from the age of 50.

Where to Get Further Advice

If you have concerns about symptoms you are experiencing, consider speaking to your GP for a referral to see one of our qualified Oncologists at Hunter Valley Oncology.